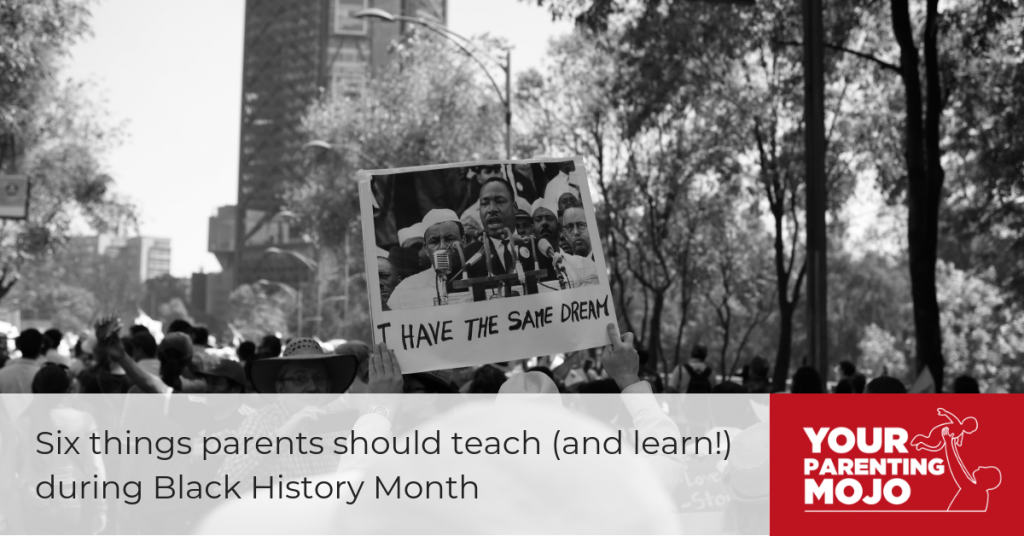 As a white parent, I feel very conflicted about wading into a debate about Black History Month.  Plenty of people have argued that we shouldn’t confine our study of Black history to just one month (and that it has failed to bring about any improvement in race relations, and it wasn’t intended for White people at all).  I see Black History month as a less-than-ideal but still necessary tool to elevate discussion of Black contributions to American society while we work toward a situation where Black History Month is simply not necessary.

The biggest paradox with Black History Month is that it provides parents and educators with a convenient ‘teachable moment’ to help their children learn about slavery and the civil rights movement but then we abandon the concept again for another year, and usually fail to even mention the ongoing presence of both racial prejudice and structural racism in our society.

What we currently teach about race and racism is grossly inadequate:

Around 80% of teachers in the U.S. are White, and many of them feel highly uncomfortable discussing race with students (so if your child’s teacher is making an effort to do this, please support them by letting them know you appreciate their work and continuing the conversation at home!).  Many teachers attempt to avoid the discomfort of an actual conversation by using classroom simulations of racist situations.  While there’s a dearth of actual evidence on their effectiveness several groups warn against these because they perpetuate stereotypes, oversimplify history, and leave students with the impression that the problem has been solved when in fact racism still today causes disparities in health and wealth, experiences with the justice system, and access to credit and housing.

Parents who want their children to understand the implications of prejudice and structural racism cannot rely on schools, textbooks, and teachers.  We must take on some of this responsibility ourselves.

Here are six ideas to get you started:

You can learn more about these topics through a series of podcast episodes that I’m running right now.  I’ve already released a conversation with Dr. Margaret Hagerman, author of White Kids: Growing Up with Privilege in a Racially Divided America, on the topic of white privilege in parenting. Up soon will be an interview with Dr. Allison Roda, author of Inequality in Gifted and Talented Programs: Parental Choices about Status, School Opportunity, and Second-Generation Segregation on white privilege in schools.  Then we’ll talk with the renowned educator on race relations in the U.S. and author of Why Are All the Black Kids Sitting Together in the Cafeteria?: And Other Conversations About Race, Dr. Beverly Daniel Tatum, and we’ll conclude the series by asking Dr. John Bickford about what children learn about race and racism in schools, and what needs to be our role in this process.

Click here to listen to the first episode in the series and subscribe (it’s free!) to make sure you catch the rest, then join us in the Your Parenting Mojo Facebook group to continue the conversation (just search for the #whiteprivilege thread).

← How to talk with your child about Valentine’s Day (whether or not you celebrate!)How to Raise a Wild Child →