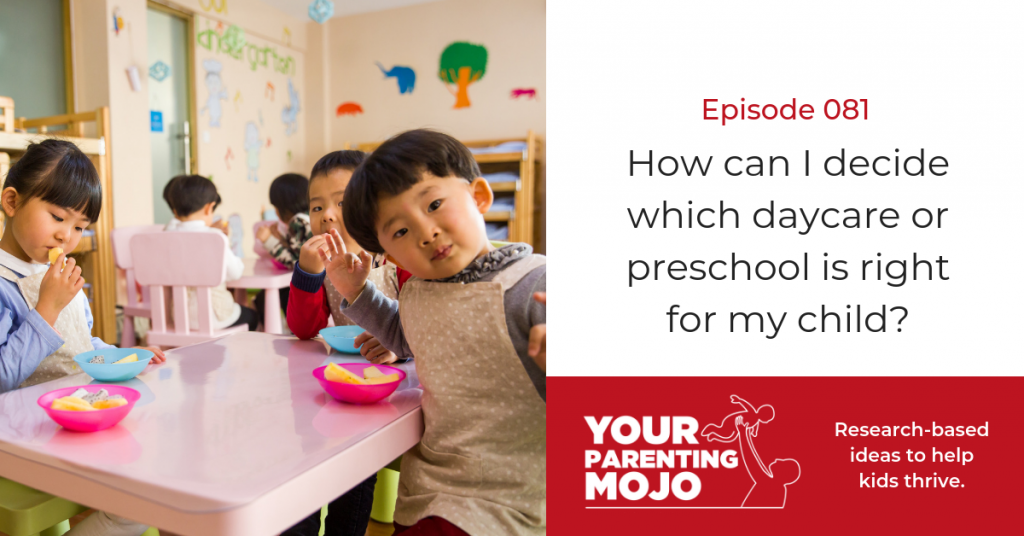 I regularly receive questions from listeners asking me whether they should put their child in daycare or preschool and my response has typically been that there isn’t a lot of research on the benefits and drawbacks for middle class children on whether or not the child goes to daycare/preschool, and that is still true.  I’ve done research on my listeners and while parents of all types listen to the show, the majority of you are fortunate enough to not be highly economically challenged.

You’ll also hear me mention in the show that it’s really, really difficult even for researchers to accurately measure the quality of a daycare/preschool setting because you can’t just get data on child:teacher ratios and teacher qualifications to do this.  You have to actually visit the setting and understand the experience of the children to do this – but what do you look for?  And what questions do you ask?  In the show I mention a list of questions you can ask the staff and things you can look out for that Evelyn Nichols, M.Ed of Mighty Bambinis and I put together – you can download this by entering your name and email address below.

Let me know (in the comments below) if you have follow-up questions as you think through this decision for your family!

Felfe, C., & Lalive, R. (2012). Early child care and child development: For whom it works and why. Discussion Paper No. 7100. Institute for the Study of Labor, Bonn, Germany (Forschungsinstitut zur Zukunft der Arbeit). Retrieved from http://hdl.handle.net/10419/69379

Kottelenberg, M.J., & Leherer, S.F. (2013). Do the perils of universal child care depend on the child’s age? CESifo Economic Studies 60(2), 338-365. Retrieved from https://www.researchgate.net/profile/Steven_Lehrer/publication/275380692_Do_the_Perils_of_Universal_Childcare_Depend_on_the_Child%27s_Age/links/586d9c8108ae8fce491b5e94/Do-the-Perils-of-Universal-Childcare-Depend-on-the-Childs-Age.pdf