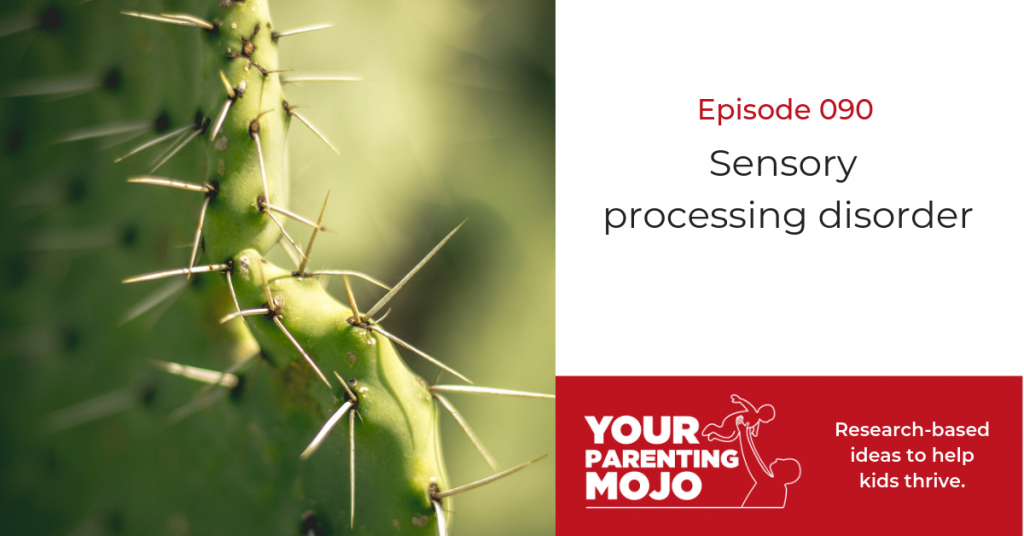 This episode comes to us courtesy of my friend Jess, whose daughter has Sensory Processing Disorder (SPD) and who is on a mission to make sure that as many parents as possible learn about it.  She says that every time she describes it to a parent they realize that they know someone who exhibits behavior that looks like SPD that warrants following up.

I have to say that I was highly ambivalent about doing this episode, because I don’t usually deal with topics that result in medical diagnoses as I’m (obviously) not a doctor. But the more I looked into this the more I realized that helping parents to understand the mess of research on this topic is exactly the kind of thing that I usually do on this show, and that an episode on this topic could probably be useful to a number of you.

Hello and welcome to the Your Parenting Mojo podcast. Today’s episode on Sensory Processing Disorder comes to you courtesy of my friend Jess, and I’m going to tell you a little about Jess and her daughter as a way to introduce the topic. Jess told me that her daughter likely had a mini-stroke either in utero or during birth that affected the left side of her body, and Jess figured this out around the time her daughter was 10 months old. So her daughter started physical therapy for that, but Jess still felt as though something wasn’t quite right, and while she already had a pediatrician, physical therapist, and neurologist, six months or so of Jess being (in her words) “a crazy parent,” along with the support of her mother who happens to be a pediatric physical therapist, to convince her daughter’s support team that something wasn’t right, and finally her daughter was evaluated for sensory processing disorder. Her daughter received occupational therapy treatment and is now doing very well.
Jess realized that if she hadn’t been especially vocal, and if she hadn’t had her own mother’s expert support, then it’s possible that her daughter’s issues would have gone undiagnosed. Jess told me she has started talking with anyone who will listen about this topic and whenever she mentions it a lightbulb goes off with whomever she is talking with about either a child in their lie or a friend of a friend who is having similar issues, so she asked me to do an episode on it so more people could learn about it.
Now I have to say that as much as I love Jess I did hesitate before taking this on. I don’t usually deal with topics that result in medical diagnoses because I’m obviously not a doctor or a psychiatrist. But the more I looked into this the more I realized that helping parents to understand the mess of research on this topic is exactly the kind of thing that I usually do on this show, and that an episode on this topic could probably be useful to a number of you. So, to reiterate, I am not a doctor or a psychiatrist, and this episode is not intended to diagnose, treat, cure, or prevent any disease. In fact, for reasons we’ll get into in the episode, it’s actually kind of difficult for a doctor to diagnose as well. So we’ll talk about diagnoses, and about the efficacy of treatment for SPD, and finally about how to chart a path forward if you suspect that your child may have difficulties processing sensory information.