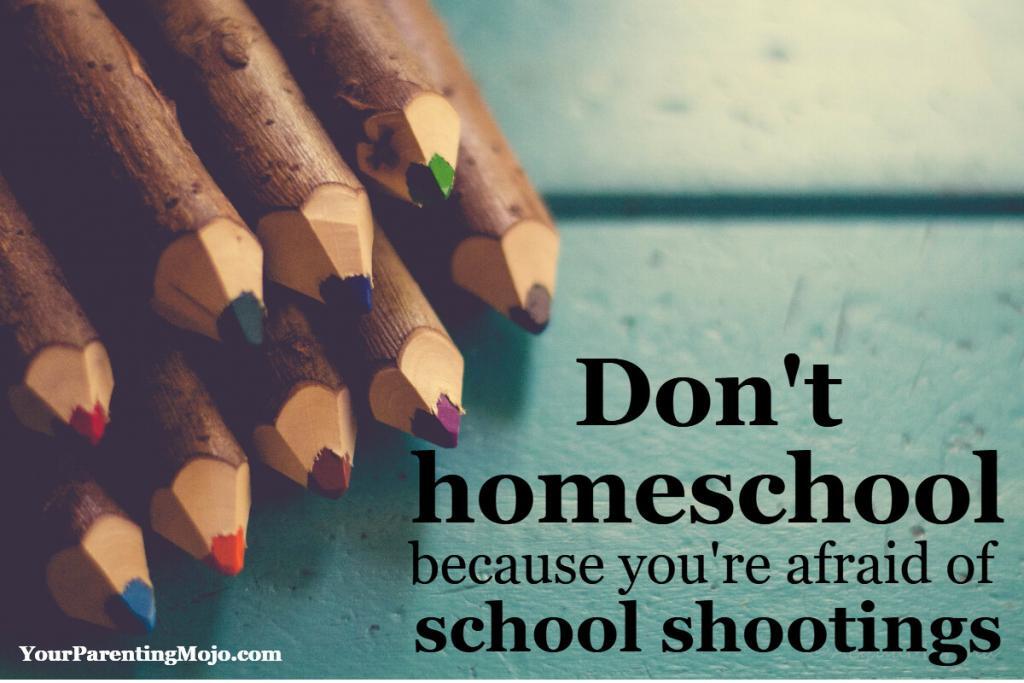 Dramatic responses are understandable after traumatic events because want to distance ourselves from the pain, and ‘make sure it never happens again.’

I saw a lot of articles in the weeks immediately after the Florida school shooting discussing how parents were considering homeschooling because they were afraid; another recent spate of articles note that there have been more than 20 school shootings so far this year (and it’s only May!) where someone was either hurt or killed.

Kathy Lowers of Collier County, FL had a son who was one month old when the Columbine shootings happened, and decided that schools were no longer safe.  Her perspective is underscored by a statement in the same article by Michelle Estes, the secretary of the Children’s Home Educators Association of Collier County, who said that “the only way too guarantee your kids are safe is to have them by your side.”

And it’s not just in Florida – parents as far-flung as Arkansas, Pennsylvania, and Missouri report thinking about or actually pulling their children out of school because of concerns about safety.

We shouldn’t need bulletproof backpacks to protect our children at school, but we cannot harden all schools against all forms of attack.  As long as there are guns essentially freely available to pretty much anyone who wants to buy one, we will continue to see attacks on schools, movie theaters and workplaces.

It’s natural to want to avoid things that scare us and things that might hurt us.  And at the same time, we want the best for our child.

But being afraid of gun violence is not a good reason to pull your child out of school – because you or your child could just as easily get shot at the mall, at a concert, or at work – or (if you own a gun) in your own home.

Indeed, if there is a gun in your home it seems possible that your child might be less safe there than in school, given that living in a home with guns present increases the risk of homicide by 40-170%.

But even if safety is the wrong reason to homeschool, there are many great reasons to consider it.  In fact, homeschooling may be one of the hottest trends in education, since more children are now homeschooled than attend charter schools.

And believe me, this is not your mother’s homeschooling – when I first learned about homeschooling I thought they were a particular type of the population but actually secular homeschoolers may be the fastest-growing group.

These parents are worried about budget cuts; about class sizes; about standardized testing; about what their children are learning in school; about how school might be one of the more effective ways of squashing curiosity and a love of learning out of a child.

People just like you are thinking “could homeschooling actually work for me?”

(By and large, teachers are NOT among the “reasons to consider homeschooling.”  I’ve interviewed teachers across the country and am continually impressed by their talent and dedication.  On more than one occasion they’ve been moved to tears when they talk about how much they care about their students.  Teachers are not the problem: the system they are forced to work within is the problem.)

Some of the most common reasons given keeping children in schools are that they allow children to learn life skills and social norms, and that they expose children to diversity in people and in ideas.  Plus there’s always the concern: how will they ever get into college?

Learning social norms by being separated from society

But isn’t it ironic that we expect children to learn how to behave in society by separating them from society and putting them in a group of individuals exactly their age, where they learn things (as we have already seen) that don’t prepare them for life outside school?

Think of the last training you did for your work.  Now, did you ever apply what you learned to your work?  If not, chances are it’s because you learned it in isolation and never practiced integrating the new knowledge into what you actually do all day.  Maybe the things you spend most of the day thinking about aren’t even remotely related to the training.

Students don’t learn to manage money, manage their mental health, how to buy, sell, repair, manage, or maintain a car or house, how to be a good spouse or take care of and raise a child, how to communicate professionally, and how to cope with failure in school.  They don’t learn skills like self-control, motivation, focus, and resilience.  They don’t learn how to learn beyond rote memorization.  (If you prefer to hear this in the form of a rap, click here.)

This article summarizes five critical social skills, and concludes by asking “What can happen when kids don’t follow social rules?” The response given is that your child may find himself being bullied by other children – as roughly 35% of children in school are.  But should we lay this blame on the children being bullied – or does some of the fault lie with the bullies?  And is it possible that these lessons about social skills could be more effectively learned in environments outside of school?

Exposing children to diversity…but not too much

Parents say that they value diversity in schools (one national survey found that 73% of parents say that having a racially diverse student body is “very” or “somewhat” important for their children to attend a diverse school), but their actions show that their support for diversity is actually rather limited.  One mother involved in a research study on the importance of student body diversity was asked whether racial or ethnic makeup was an important factor in her school choice decision, and responded “It is ideally, but I didn’t have a lot of choices so I went with a school that I felt had the best educational program even though I would like a school to be more diverse.”

White parents want diversity in schools, but they also want to make sure there’s a critical mass of other white students in their children’s schools and classrooms: one white mother in the same study said “I don’t want to be the minority.  I want a comfortable place for my children.”

Privileged families move to different houses in the attendance zones of desirable schools, use information they get from the directors of their expensive preschools, and use their extensive networks to navigate the application system and get their children into “good” schools, defining those schools more by the racial makeup of the school than by what is taught.  They opt in to “Gifted and Talented” programs which effectively segregate otherwise diverse schools.

Diversity is great for your kids…when they can get it.  It’s possible they might be exposed to more diversity just by living life in society than by being in school.

How can a homeschooled child get into college?

Three of Grant and Micki Colfax’s four children got into Harvard.

In the late 1960s the couple protested the Vietnam War and worked for the civil rights movement.  One night in 1968 they received a phone call threatening their son’s life – and the police called David a “goddamned draft dodger” and refused to help.  David was later denied tenure at two different universities, and he received a settlement from one of them for violation of his academic freedom due to his political activities.

After that, the couple bought a plot of land in remote Northern California – one the real estate agent told them was “no place to raise children.”  They carved out a homestead and began homeschooling.  When their oldest son, Grant, won a full scholarship to Harvard the family made the national news.  The next two sons followed Grant to Harvard, and the fourth works in the software industry.  (Read all about it in their book Hard Times in Paradise.)

Homeschooling is no impediment to college acceptance and later success, and it may even be an advantage as their self-directed accomplishments distinguish your child from all the other suburban children with straight As and seven extracurricular activities.  Stanford even tags homeschooled applicants with a special code so they can be found more easily among other applicants.  Why?  Because of their intellectual vitatility.

So why should you consider homeschooling?

Well, we’ve implicitly covered a number of these reasons by now.

Your child wouldn’t have to learn the same thing that every other child in the country is learning.  She could follow whatever curriculum you wanted: heavier on science, or math, or writing, or whatever is most important to your family.  Or you could do away with the curriculum entirely and just follow your child’s interest.  (Remember the part about Content being the least important of the six Cs?  If you spend less time on that, it frees up a whole host of time for the other five Cs.)

If you don’t believe that standardized testing is an accurate representation of what children know, you could opt out of testing in school but then your child would still have to go through the test-based teaching geared toward the rest of the class.  (Keep in mind that civil rights groups oppose opting out of testing because it demonstrates the achievement gap between children of dominant and non-dominant cultures.)

Alternatively, you could do away with assessments entirely and just encourage your child to share his knowledge with others who are interested in the same topic – both peers and adults.  They will offer critiques for him, suggest different strategies, and provide the guidance he needs.

She can socialize with children and adults of all ages, doing away with the notion that only socialization with children of exactly her age is valuable.  Indeed, she may get far more out of relationships with both younger and older children, as well as with adults of all ages – based on their shared interests rather than their age.

Most importantly, he can learn – about himself, about the world, and about his place in it.  From actually living in it, rather than memorizing facts about it in school.

Don’t homeschool because you’re afraid of school shootings.  Do it because it facilitates the best kind of learning there is – learning how to learn, in a way that inspires her to love learning.  Don’t we all want that for our children?

Jen Lumanlan (M.S., M.Ed.) hosts the Your Parenting Mojo podcast (www.YourParentingMojo.com), which examines scientific research related to child development through the lens of respectful parenting.  She also launched the most comprehensive course available to help parents decide whether homeschooling could be right for their family.  Find out more about it – and take a free seven-question quiz to get a personalized assessment of your own homeschooling readiness at www.YourHomeschoolingMojo.com

← I'm featured on the How to Get Away with Parenting podcast!How to get a toddler to brush teeth! →