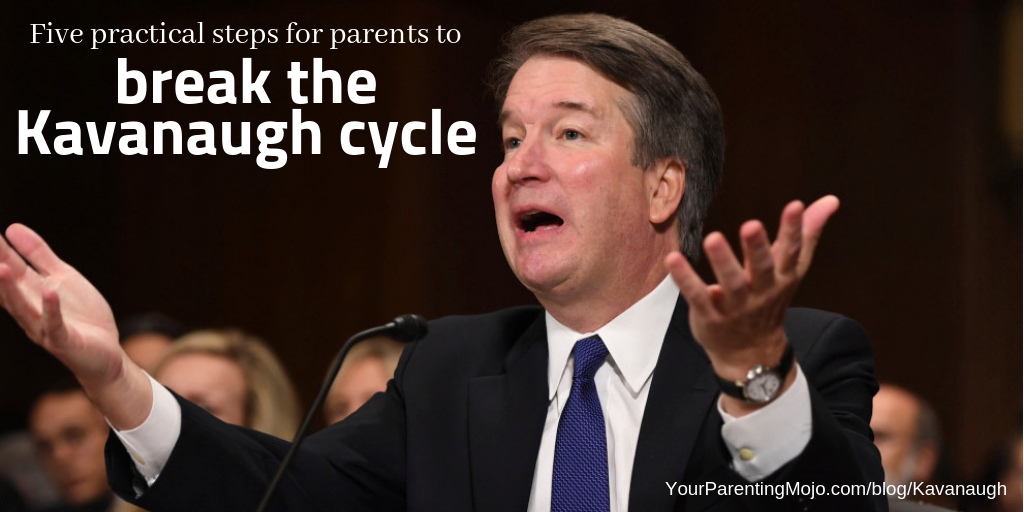 I don’t normally write political posts.  It’s not my expertise, and while four of my top five StrengthsFinder strengths are related to learning the fifth is Harmony, which means that while I enjoy a conversation about ideas, I can’t stand feeling attacked.  Political discussion just seems to often bring out both the best and worse in people.  And Your Parenting Mojo is about inclusiveness and commonality, not division.

But what’s going on with the Kavanaugh nomination fills me with both anger and despair – for the immediate cause, for sure, that we are about to confirm a nominee to the Supreme Court who may have committed sexual assault but we can’t know for certain because nobody will conduct a proper investigation.

What fills me with far greater frustration and despair is that Kavanaugh’s story is far from unique.  How many of the next candidates down the list of potential nominees can say with certainty that no such incident could possibly have occurred while they were attending their own fancy prep schools?  For that matter, how many of the Senators who are so incensed about Kavanaugh’s ‘treatment’ by the Democrats can be sure that they have never come close to crossing that line themselves?  After all, Senators don’t undergo any kind of routine background check before they are seated so the already long list of Senators who are accused of sexual misconduct might just be the tip of the iceberg that nobody has yet investigated.

Why are we in this position?

We could argue that times were different then.  Rich boys at fancy prep schools did things they shouldn’t have done.  Adolescent drinking was out of control.  There wasn’t the same culture of backing off when a woman says “no.”

As much as we might like to think things have changed, they haven’t.  Rates of alcohol abuse among rich kids are as high today as they were in the ‘80s.  One in five women will be raped and one in three women will experience some form of sexual violence at some point in their lives. More than 90% of women are raped by an intimate partner or someone they know.

We’re afraid of being jumped by some random guy on the street but we should really be afraid of the men we know.

Parents, I hope this doesn’t sound like finger pointing.  If it does, the finger is pointing as much at me as it is at any of us.  But I see my finger out there pointed squarely at me and I want to do something about it.

The reason is us

The reason our children become adults who do these things is because we teach it to them. And we do it without even realizing it.

We teach it to boys and girls when we don’t respect their body autonomy: we tickle them to make them laugh even though they don’t like it (because if they’re laughing they must be having fun, right?); when we force them to stand still for unwanted kisses from distant relatives; when we can’t bring ourselves to say “penis” and “vulva,” which gives them the language they need to tell us when they aren’t safe.

Our actions that seem so benign have real-world implications for our girls’ safety and our boys’ ability to understand and listen to their own sense of what’s right and wrong.

Five powerful actions you can take

Here are five powerful yet practical steps you can take today to make a start:

And vote, of course.

← Social Exclusion: What to do when a child says "I never want to play with [Friend] again!"Why does parenting advice seem to change so often? →