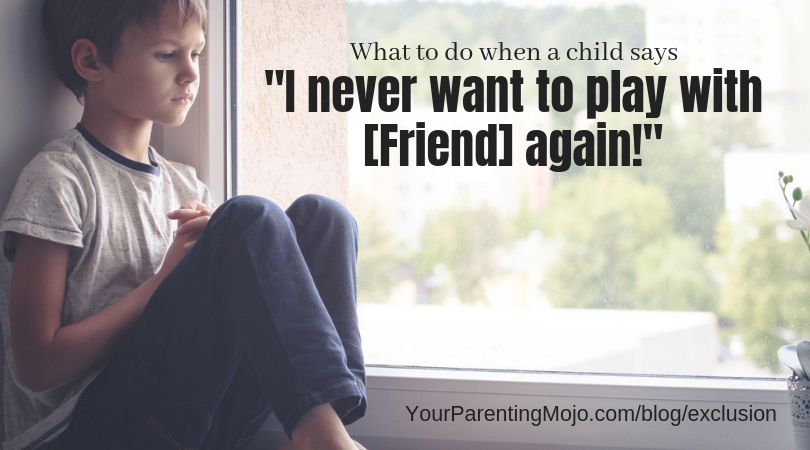 The new school year is now well underway; my daughter moved up to a new preschool class this year and we certainly seeing some changes.

She’s in with the fours, fives, and some sixes now and relational aggression is rearing its ugly head.  Almost every day we’re hearing some version of “[Friend] said she didn’t want to play with me today,” or “I’m never going to play with [Friend] again!” or “I’m not going to be [Friend’s] friend any more.”

Typically these issues seem to be forgotten about by the next day and they’re back to playing together again but boy, am I sick of hearing about it already!

What the research says

I was reminded of the episode on social exclusion that we did almost a year ago with Dr. Jamie Ostrov of the State University of New York at Buffalo, who is an expert on childhood aggression and bullying.  He let us know that aggression is actually very, very common in preschoolers, and that relational aggression is especially common amongst girls who seem drawn to a dyadic relationship (or does our society push them toward these by our constant questions about “who is your best friend?”) so one of the most efficient and effective ways to hurt a girl are to harm the relationship she has with you, or that she has with others.

Boys are typically more interested in showing their strength and dominance, which may be why we see more physical aggression from them.

Dr. Ostrov explained that children may engage in aggressive behavior to obtain a goal (e.g. “I won’t be your friend if you don’t give me that toy”) or in a reactive way (“You said something that hurt me so I won’t be your friend any more”).  Children who engaging in reactive behavior may benefit from support in developing empathy, whereas if we teach children about empathy when they are using aggressive behavior to obtain a goal, then they may learn that their behavior is actually having the desired effect.  Children who use relational aggression extensively often have the most positive relationships with teachers and are skilled at manipulation.

Dr. Ostrov developed an intervention, in the form of classroom visits from puppets who would bring a new “friend” puppet who would act out prosocial scenarios together, and then a researcher would walk around the classroom with the puppet during free play and praise them for prosocial behavior and the effect it had on the other person at the moment it happened.  The children all wanted to be praised by the puppet and the only way to do that was to engage in friendship formation and inclusive behavior.  Dr. Ostrov said that the eight-week program was effective at reducing aggressive behavior and increasing prosocial behavior even after the intervention had finished.  Key to the success of the program was praising specific behavior in the moment, rather than offering general praise (“good job!”) or praise a long time after the fact (which causes some students to manufacture prosocial behavior to get a reward).

Honestly, I was rather uncomfortable during the interview about the use of praise to increase prosocial behavior given that this flies in the face of decades of research on the ineffectiveness of praise to motivate people in general and children in particular.  I’d be curious to find out whether the positive effects of the intervention held in the longer-term, although funding to study this kind of outcome is rarely available.

For our part, parents tend to view relational aggression as a normal part of childhood, but this is really problematic because relational aggression is associated with a host of negative outcomes for both the aggressor and the receiving child.  Both parents and teachers should convey that these behaviors are not OK, should talk about how the receiving child might feel, and help the child to learn and use strategies to deal with it, including reporting it to parents and teachers (which keeps friends safe; not tattling, which is not done for the purpose of keeping friends safe).  One preschool teacher had a useful strategy to help children resolve conflicts by themselves: the first is for one child to say to the other “Please stop.”  The next step is to say “Stop, or else I’ll tell the teacher.”  Only if this is ignored should the children involve the teacher.

I’ve already emailed my daughter’s school to describe some of the stories I’m hearing at home and ask them about their planned approach.  This really helpful (research-based) article from the National Association for the Education of Young Children contains some good pointers to discuss with the school, including the need to understand why the aggression is occurring, which can provide new clues about reducing its incidence.

One strategy that may be especially helpful at home that also reiterates something Alfie Kohn mentions in his book Unconditional Parenting is to view behavior in its best possible light: when one child knocks another child’s block tower over, the parent/teacher can say “Oh, it looks like he wants to play blocks with you.”  Even “Uh oh; the blocks fell over” would be better than “[Friend] knocked over the blocks” as the former avoids the need to blame anyone for the incident.

You can play games that encourage cooperation rather than winning.  We enjoy playing Granny’s House, a cooperative version of Chutes and Ladders.  Encourage natural leaders to lead by helping others, rather than by ordering them around.  And consider characters’ feelings as you read children’s books – you can do this while you read any book, although here is a list of books specifically about friendship issues, organized by age-appropriateness.

If your child is in a classroom with children who look a lot different from them, you might also be interested in my episode on how social groups form, since looking different can become the basis for prejudiced behavior toward people in other groups (unfortunately we don’t really have that issue in my daughter’s preschool because pretty much all the children look a lot alike, although we’re addressing this issue in other ways).

Being in a classroom with children who don’t look like them provides enormous opportunities for children to see the person behind the skin color/disability/whatever makes the other child different, which can be really important in helping the child see that all different kinds of people are really individuals just like them, not just “members of a group who look different from me.”

We’re at the beginning of a looong phase for girls (parents of boys may get a reprieve in the beginning, although Dr. Ostrov says they often catch on to tools of relational aggression eventually – and they are often taught these tools by girls).

Hopefully if enough of us give our children the message that relational aggression is not OK, we’ll start to see less of it…here’s hoping, eh?

← Is your child’s school separation anxiety a real problem – or not?Five practical steps for parents to break the Kavanaugh cycle →