It starts with us. Together we can make a difference.

A number of parents have reached out to me recently asking me to gather all of my resources related to race on one page, so they can be sure not to miss any of them.

I want to be clear that I don't consider myself to be an 'expert' on this topic.  If you'd asked me four years ago whether I felt I had any particular privilege as a (white) parent of a mixed-race (but white-presenting) daughter, I would have said "No, I don't think so."

Three years ago, fellow podcaster Malaika Dower reached out to me because she was a Your Parenting Mojo listener and wanted to interview me about homeschooling.  I started following her show, and in one of her episodes she mentioned how Black parents can't have their child take food or a toy into a store, in case someone thinks they stole it.  Black parents of boys are terrified that their child will have a tantrum in a store, because an out-of-control Black boy is perceived as a threat.

I don't worry about those things.  I have privilege.

This series of episodes represents my own journey in understanding my privilege, using my platform to help others to understand their own privilege, and to work to dismantle systemic racism.

One way to listen better is to listen directly to the voices of parents of non-dominant cultures.** Click the button below to jump to a list of social media accounts to follow.

Jump to the Social Media Accounts 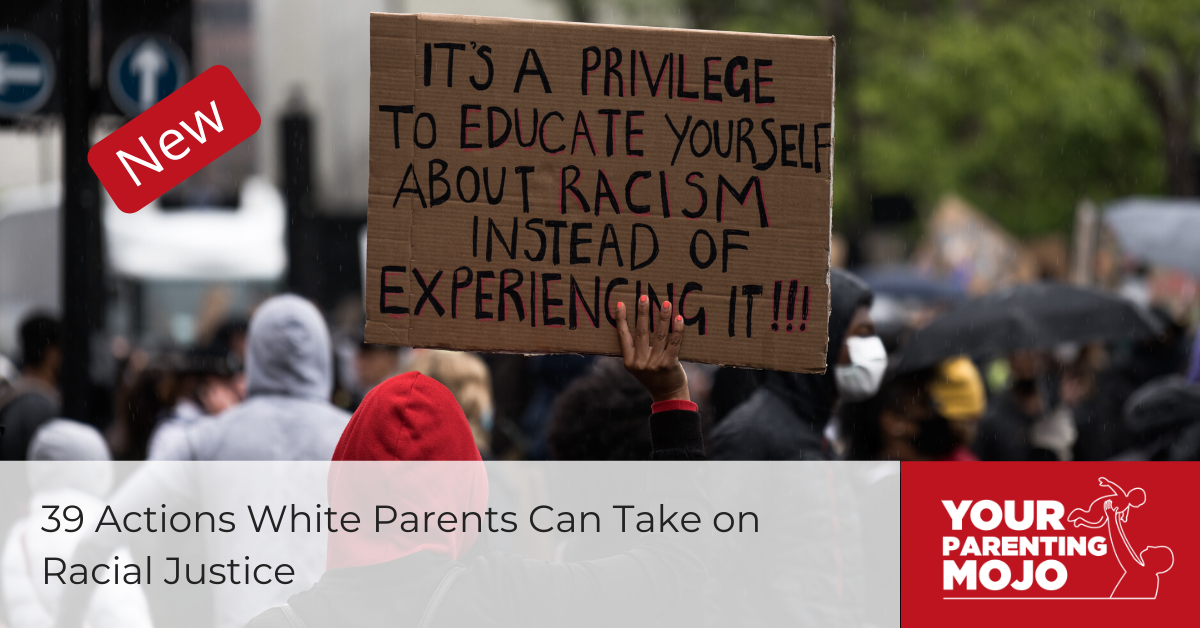 Blog Post / 39 Actions White Parents Can Take on Racial Justice
So we've come to terms with the fact that we have privilege.  What do we do about it?  This post provides some ideas for ways to start dismantling systemic racism. 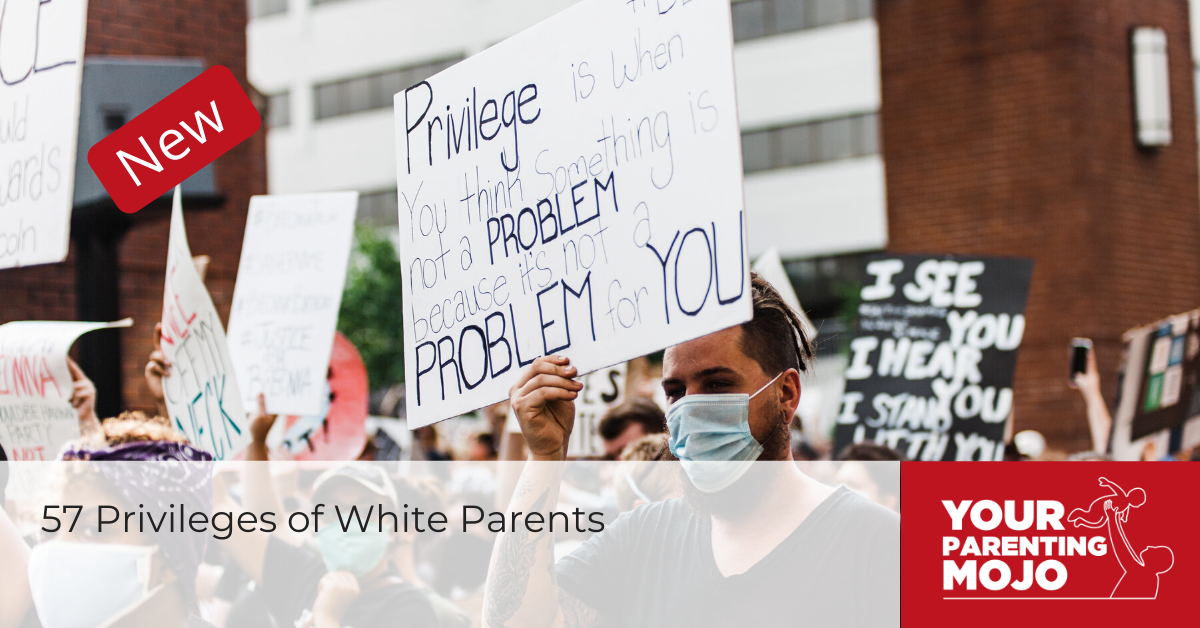 Blog Post / 57 Privileges of White Parents
When we identify as White, it's very easy for us to think that we don't have any special privilege (especially if we grew up in a family that wasn't very affluent, and we saw our parents working hard).  Part of the reason this is so hard to see is that the system is designed to give us benefits that we didn't ask for and to discourage us from looking to closely at where these benefits originate.  And part of the reason is that for too long, we've cast our gaze aside rather than working to understand this better.

If you identify as White, you'll probably find that you benefit from a substantial number of the (non-exhaustive) list of 57 privileges.  Maybe even all of them. 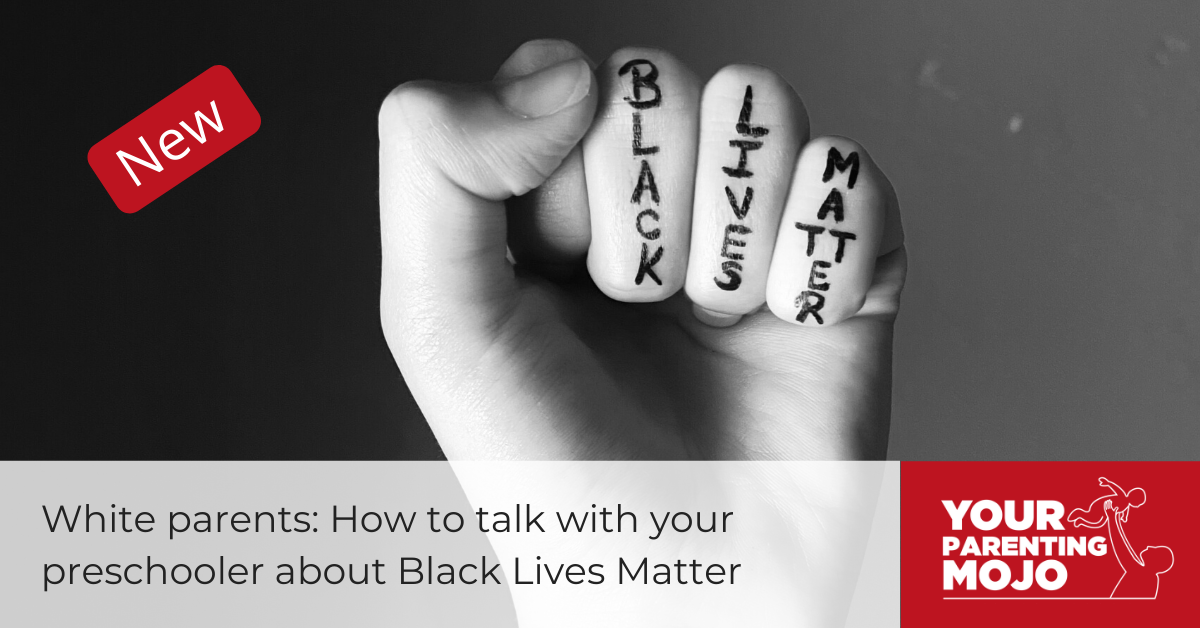 Blog Post / White parents: How to talk with your preschooler about Black Lives Matter
Parents feel caught right now.  Some parents want to protect their children's innocence, and not tell them about the murders of Black people that have happened at the hands of Whites.  Others want to tell their children something, but don't know where to start.

In this blog post I let you know what I felt it was important to tell my daughter, and some words I used in the conversation. 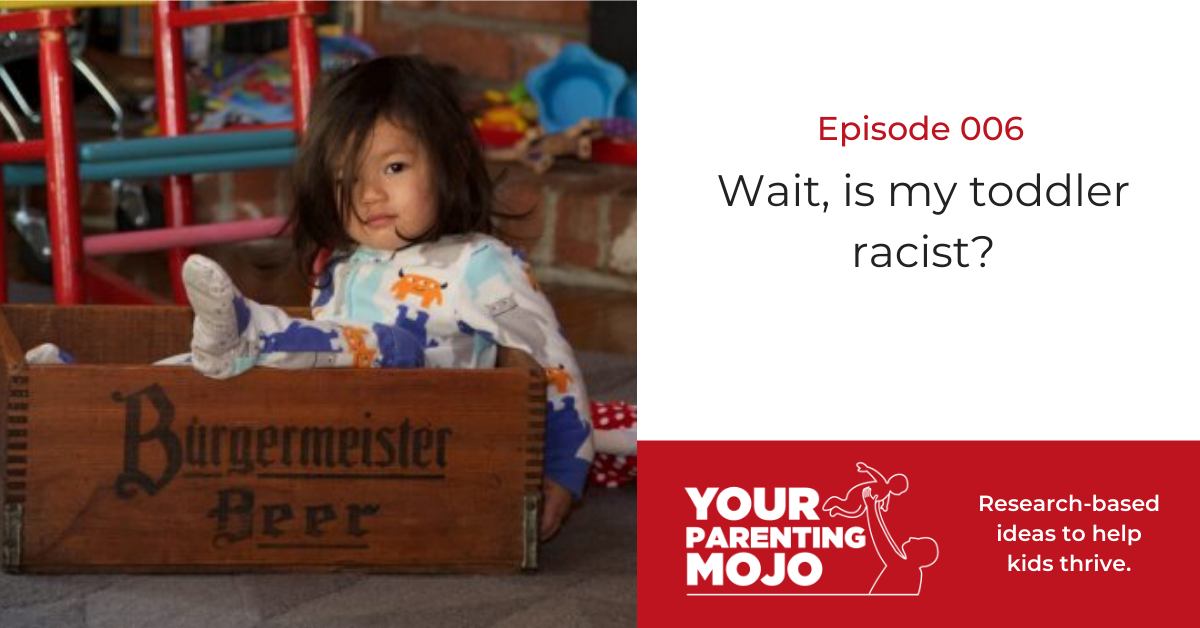 Episode #006:  Wait, is my toddler racist?
In this early episode I explore my early ideas about race - clearly I was still mixing up issues of bias and systemic racism which I now more fully understand.

The episode examines how children pick up ideas about race from the world around them, how afraid parents are of talking with their children about this topic, and how taking a 'colorblind' approach where we 'just see everyone as alike' is not an effective strategy to raise a child who will do their part of the necessary work to overcome systemic racism. 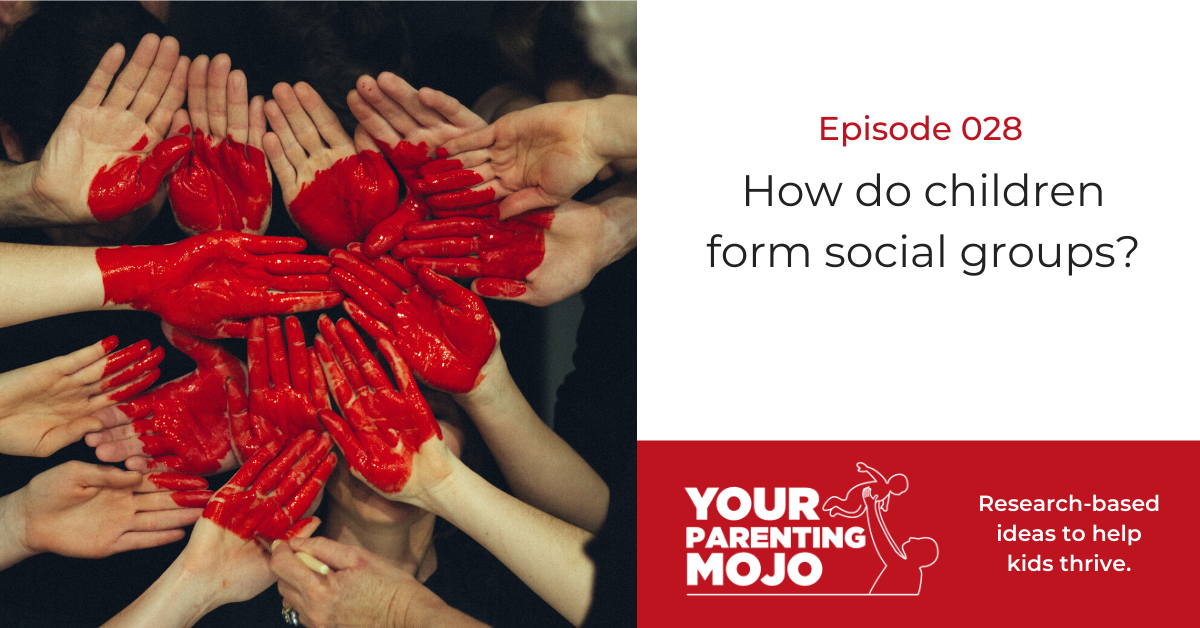 Episode #028:  How do children form social groups?
Dr. Yarrow Dunham and I explore how our brains use categories to process large amounts of complex information quickly, and that we often base these categories on superficial qualities like skin color.

Once these groups have been created, we see ourselves as members of one group and others as not-members, and it's very easy to see the group of which we are a member as superior to any other group.

We then go on to perceive the difference in status of the two groups as due to some essential, unchangeable characteristic of the people in each group - rather than seeing those group members as individuals who have hopes and dreams and worries just like we do. 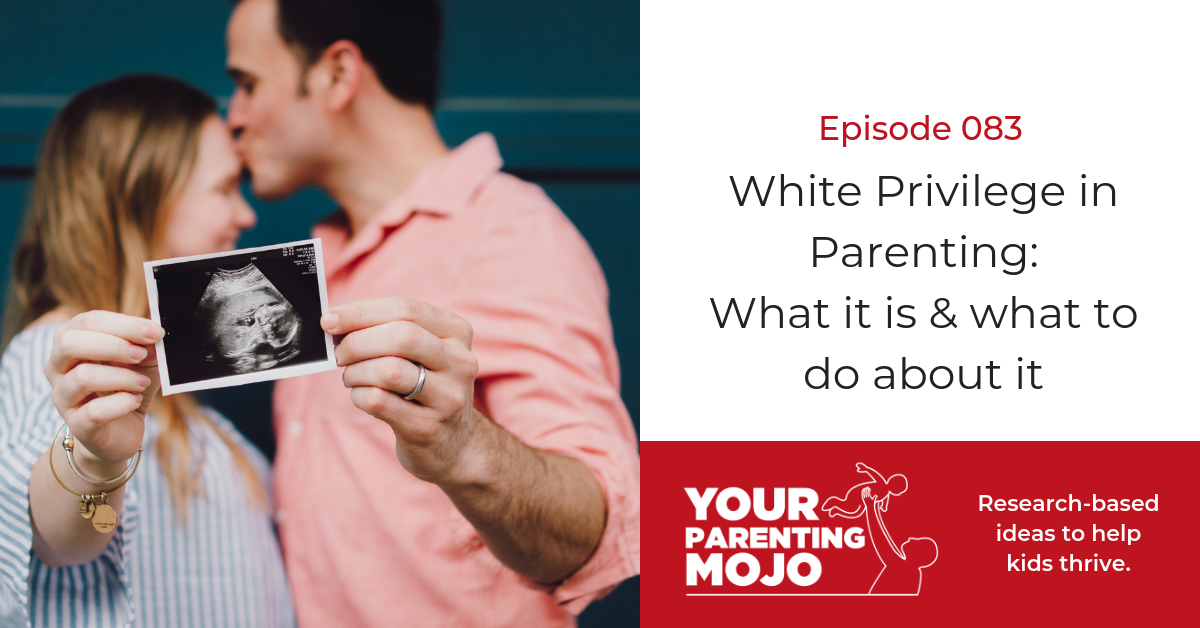 Episode #083:  White Privilege in Parenting: What it is & what to do about it
This is the first in the formal series of episodes on the intersection of parenting and race where I interview Dr. Margaret Hagerman, author of the book White Kids: Growing Up Privileged in a Racially Divided America.

We discuss how the choices we make as parents (e.g. to put our children in a public or private school) and the thing we discuss (or don't discuss) with and around our children (e.g. one parent Dr. Hagerman interviewed said she didn't feel she needed to discuss race with her child because her child watched the racially diverse show Glee) impact their views on race. 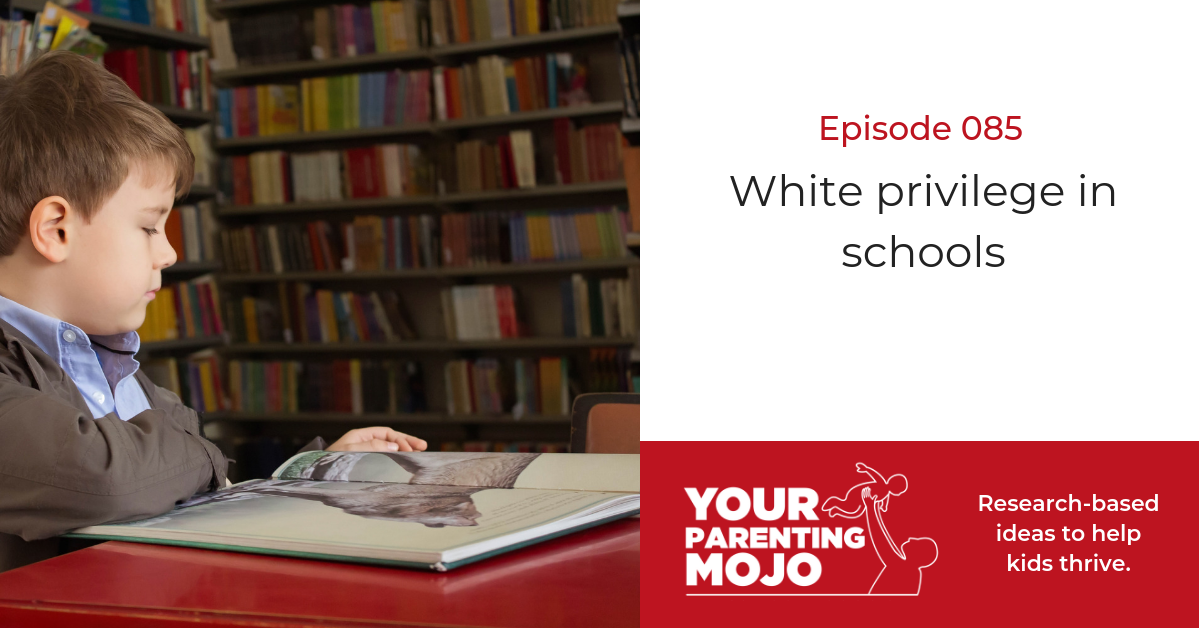 Episode #085:  White privilege in schools
Dr. Allison Roda (author of Inequality in Gifted & Talented Programs: Parental Choices about Status, School Opportunity, and Second Generation Segregation) and I explore the ways in which racial privilege shows up in schools, including: 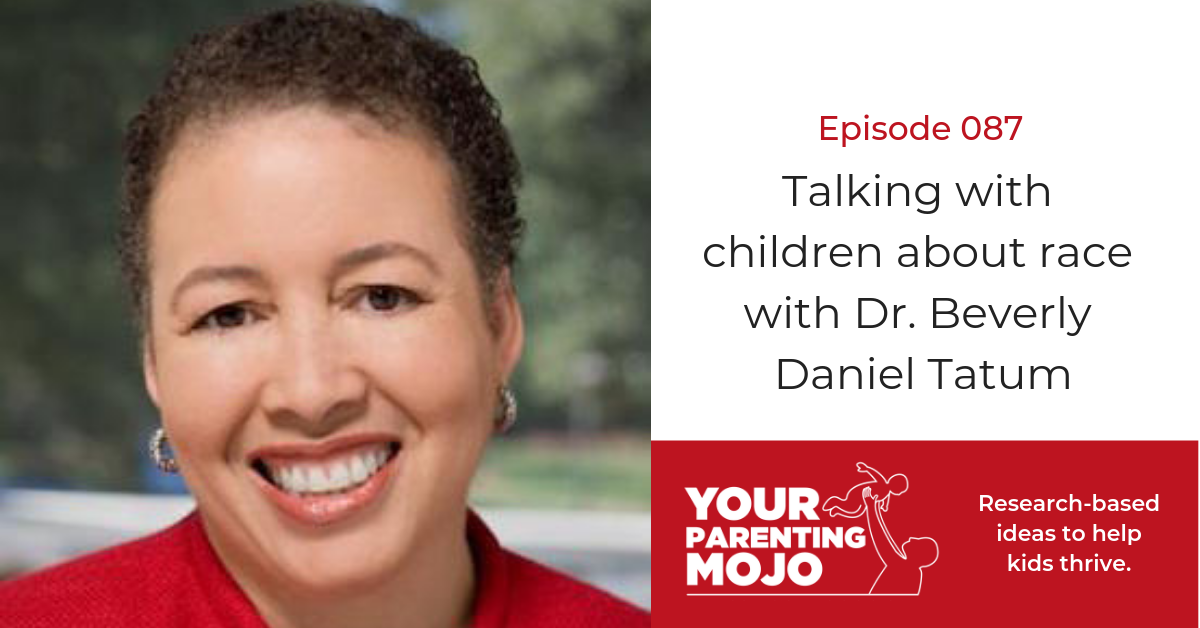 We begin with background on the election of former President Barack Obama and whether we are really heading toward a post-racial society, before we address concrete steps that parents can take to discuss issues related to race with their children. 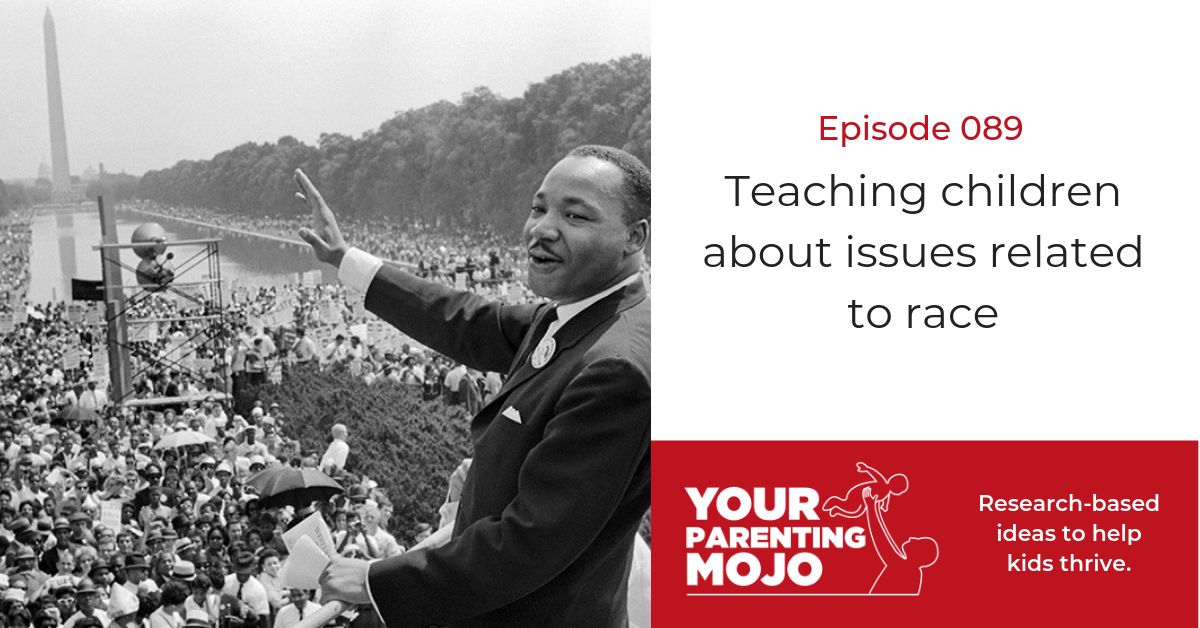 Episode #089:  Teaching children about issues related to race
Dr. Jay Bickford teaches elementary and middle school teachers how to teach social studies.  I reached out to him when I read his writing on teaching this topic comprehensively, rather than leaving children with the idea that 'Rosa Parks sat down on a bus, and now we don't have any more problems.'

We worked together to create a resource for parents to help you discuss slavery and the Civil Rights Movement with your child using widely available children's books, using The Southern Poverty Law Center's framework to ensure that you aren't missing important messages on these topics. 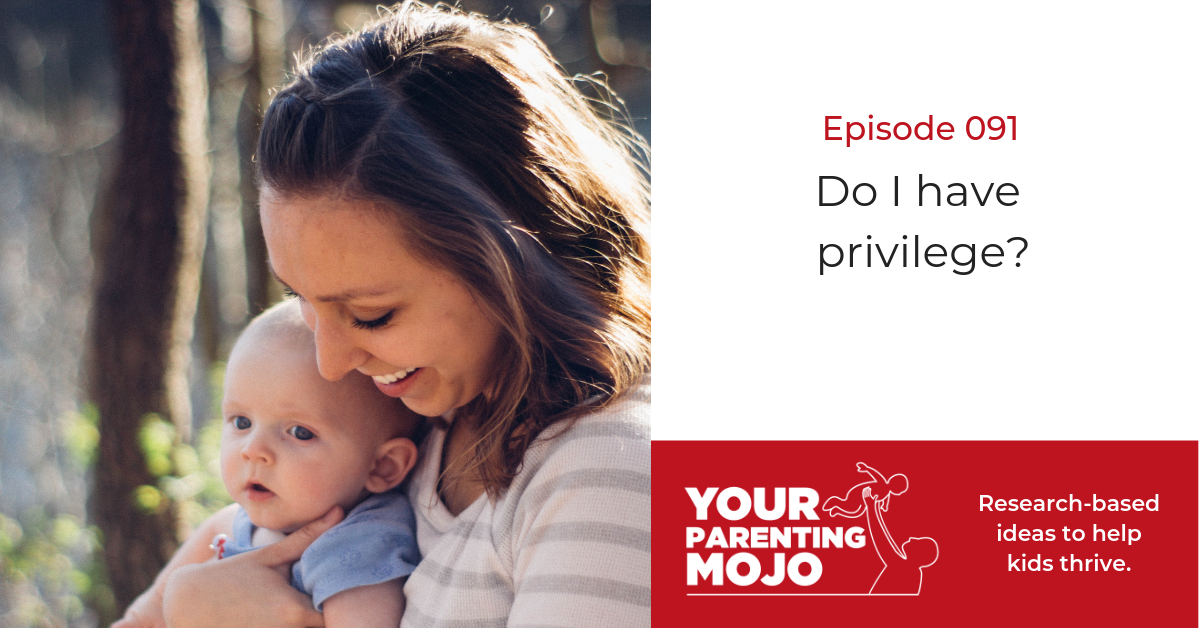 Episode #091:  Do I have privilege?
As parents of the dominant culture, it can be very tempting for us to see how hard we're working, and how stressed we are, and how we might be struggling to survive, and think "I don't really have any privilege over everyone else."

In this episode, listener Ann and I explore the process through which she began to understand her own white privilege, after she adopted a Black daughter. 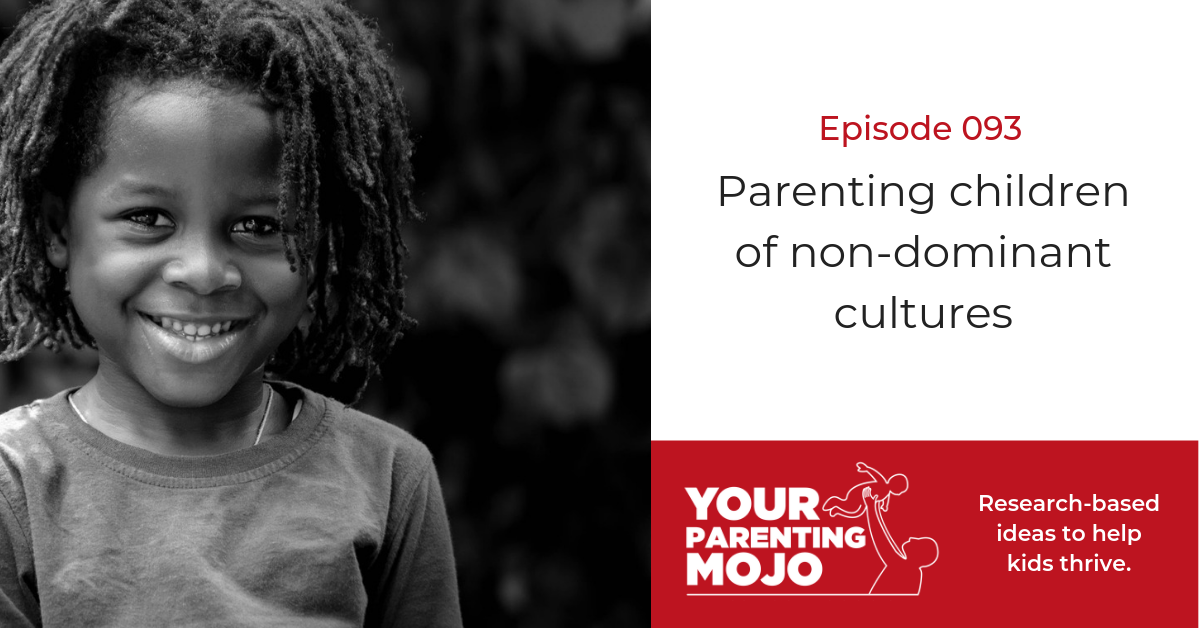 We discuss the ways that culture is transferred to children through parenting, how parents of non-dominant cultures can teach their children about race and racism, and how to balance this with messages of racial pride.

Want to understand more about the issues facing parents of non-dominant cultures?  Know you need to listen...but aren't sure how to do it?  One way is to follow them on social media.  Here are some resources to get you started.

Each day, we'll share one of the accounts below that you can then follow yourself - so by the end of a month, your feed will being you lots of information on parenting from perspectives that you probably hadn't considered until now.

Fare of the Free Child

* Some people wonder why I address this page to White parents.  There are two reasons: firstly, I don't assume that I can teach anything about race or privilege to anyone who isn't White, since the only direct experience I have is that of being White.  (Parents who do not identify as White may find some of these resources useful anyway.).

The second reason is that while it would be more accurate to address the page to "Parents Who Have Privilege," if most White parents are like me when I was at the early stage of my journey they wouldn't even recognize that they have privilege.  They might see that title and think "This page isn't speaking to me," and click away.  This is my attempt to meet White parents where they are, and welcome them into this journey.

**I've also been asked why I use the term "people of non-dominant cultures."  There are two reasons for this as well: firstly to avoid centering whiteness.  If I call myself a "White" person and everyone else "Minorities" or "People of Color" then whiteness becomes the default; the norm from which everything else deviates - and I think this idea is wrong.

The second reason is that other terms for people of non-dominant cultures don't incorporate the power imbalance which is inherent in structural racism and which I believe should be acknowledged.

I'm not afraid to say "Black," and when I mean "Black people," I'll say "Black people."  When I use "people of non-dominant cultures" I generally mean what others say when they use the phrase "Black, Indigenous People of Color" - with the added emphasis on non-White centering and power.

While the current Black Lives Matter movement is (rightly) focused on Black peoples' lives, it's my hope that in time it will expand to focus on the many Indigenous peoples whose lives have also been irreparably harmed (and many of them have been killed) at the hands of White people through systemic racism.