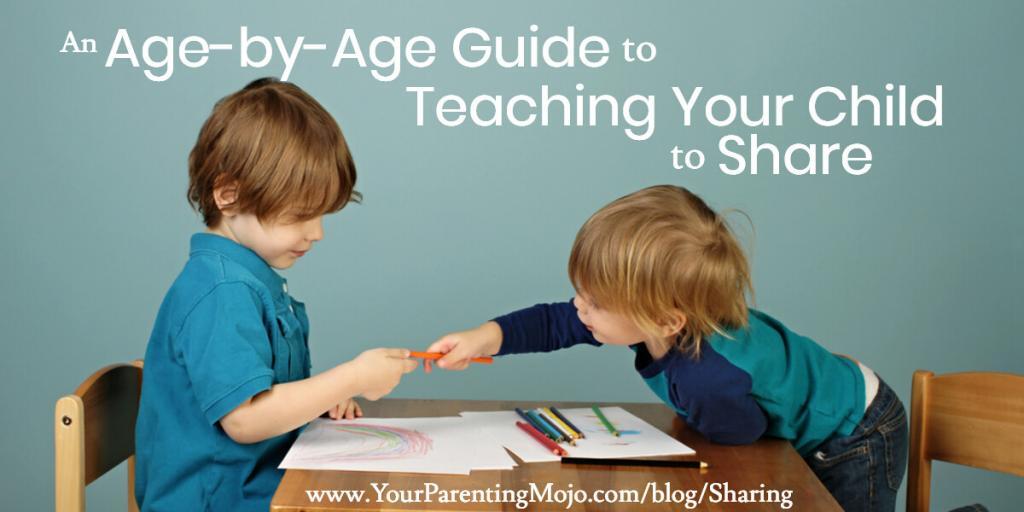 How many parents have ever heard that scenario?

(I’d be surprised if any of you haven’t.)

And how many parents are sick of hearing it?

When it’s just our own children at home, we might just step in and say: “Well if you can’t stop fighting over it, I’m just going to take it away so neither of you can have it.”  In a public place, we immediately find ourselves getting hot and anxious not because of the children, but because of what the adults around us will think of our children – and, by extension, our parenting.

Being judged is hard, right?

So how should we handle these types of situations?

I like to firstly take a step back and look at our overall goals, and then understand what is developmentally appropriate by age.

Western parents are usually trying to socialize their children to be liked by others, and adults see this sharing behavior as an indication that their child will be liked.  We also want them to share with others spontaneously, of their own volition: because we (in our society) think it’s the right thing to do, and not just because someone is telling them to do it.

Parents in different cultures use a variety of approaches at home to encourage sharing.  In cultures where individualism is less pronounced and members of society are interdependent, parents may state that there are no privately owned toys: all toys belong to all the children in a household.

Teachers in Japanese preschools may start the school year with several of a usually-favored toy, and over the course of a few months they withdraw some of these to ‘force’ children to figure out arrangements to share the toys.

At the more individualistic-oriented end of the spectrum, parents who subscribe to the Resources for Infant Educarers (RIE) approach to parenting might have separate gated areas within their house where children spend some portion of the day when they are not actively supervised.

When the children are in the same space the parent is close by, narrating what the children are doing during tricky situations: “Maria, you’re playing with the truck.  Nate would like to play as well.  When you’re done with the truck, please let us know because Nate is waiting.”  Maria might continue to play with the truck for some minutes but quite often she will voluntarily offer the truck to Nate sooner than you might expect, because there was no pressure on her to share and she was able to do it while saving face.

We should also acknowledge that, most of the time, we say “sharing” when we don’t really mean it: children are “sharing” when they split a banana or a cookie.  “Sharing” a toy really means “giving up the thing you have and really want to keep to someone else” – a concept that young children can find confusing, which naturally leads to resistance.  Using the phrase “taking turns” rather than “sharing” can help a child what is expected of them much more easily.  “Taking turns” helps the child to see that they will get the toy back again.

Very young toddlers do not understand the concept of sharing very well.  Some studies have found that a child as young as 10-12 months will bring toys or offer food to parents in apparent acts of sharing, but they are likely seeking a positive reaction or approval from the parent, or it may be part of how the two play together, or they might even be trying to keep a toy away from a sibling.  Many children will hold out an object as if to share it and then withdraw it, as they test what happens during social interactions.

By around age two, children can usually understand the concept of ownership and will protest their own toys being taken away more than neutral toys.  But they have very little understanding of how others think: they don’t know that the other child doesn’t know they want the toy if they don’t ask, which is why you find yourself in the following exchange:

Parents’ tasks at this age focus around modelling sharing behaviors: “I’m going to have a cookie.  Would you like to share it with me?” or “You have a lot of toys there.  Would you mind if I use it now, please?  Thanks!  We’re sharing!”

You can set your child up for success by not taking favorite toys to playdates (and by putting these away for playdates at your house), and by playing in natural areas where there are lots of “toys” (sticks, rocks, sand, and the like).

Outside of situations where sharing is required, you can support the development of these capabilities by encouraging your child to name their own feelings and the feelings of other people and characters in books.  Many young children can recognize facial expressions but may not understand what emotions go with those expressions.  Their vocabulary around emotions might initially be limited to “happy” and “sad,” so introduce them to the names for other emotions as well (use an emotion wheel if you have trouble naming/remembering these yourself).

Importantly, parents are NOT telling children to share, or forcing one child to give up an item so another child can play with it.  This just teaches children that a strong person can force a smaller person to give something up, which isn’t the lesson we want them to take from this interaction.

In a public place, sit close to the children to block any hits that may occur and talk them through what you see (without judging either child).

Around this age children become much more interested in playing together rather than ‘parallel playing’ next to each other, so sharing suddenly becomes relevant: a child who doesn’t share might find that their friend doesn’t want to play with them again tomorrow.  Children are also starting to develop the capability to understand what others think and want, and can take a short break from their own play to consider that another child might want the toy they currently have.

Their concept of time is evolving over this period too; at around age 3 they might still be focused entirely on the present and cannot foresee “five minutes from now” when they can have the toy.  You can scaffold this knowledge by being honest about time: don’t say you’ll be there “in a minute” or “in just a sec” when you know it’s actually going to be at least five: say “I’ll be there in five minutes, which is when the big hand on the clock reaches the four.”

They are also developing some impulse control: the ability to wait and not just grab what they want, which is an enormous help with sharing.  Parents can scaffold this ability by empathizing: “I know you want to play with the truck.  Maria has it right now.  It can be hard to wait.  When Maria has finished, you can have the truck.”  You can also suggest other toys the child might want to play with while they are waiting.

By this time the child might have a new sibling and you may find you need new strategies to deal with sharing than you had used with an only child.  You may decide that all toys belong to everyone, or each child has a special few toys that they keep aside, or (if the age difference is pronounced) that small toys need to be kept away from baby and large toys are fair game for anyone as long as they aren’t currently being used.  Decide on the rule that fits best with your overall parenting philosophy, but once you pick it, try to stick with it.  Children have trouble when the rules change often or are rarely enforced.

You can begin to scaffold the development of sharing strategies: things like taking turns, setting a timer, playing with another toy while waiting, and playing with the toy together.  In the beginning you might need to suggest these strategies but over time, children will use these by themselves and will develop their own strategies too.

It’s important that the children involved agree to the strategies, rather than having you (or the older/bigger child) impose them, so the smaller/younger child gets to understand that their needs are important too.  The child who has the toy should also have the option to say “I’m using this right now.  I don’t want you to play with it.”

In public places, where a conflict between children is brewing, you might ask the other parent “Are you OK with letting them work it out by themselves?”

Hopefully by this age you’re starting to reap the benefits of the work you’ve put in thus far as the children becomes more able to use the skills you’ve been working on by themselves.  The child may have a few very special possessions that they don’t want others to play with – special Lego structures, for example – which works in most families as long as there’s enough Lego to go around.  We all have one or two special things that we don’t like other people to use, and children are no exception.

If you’re still not seeing sharing behavior by this point, it might be time to step in with some new tools.  You could role-play with your child: play alongside them, and when they ask you if they can use something that’s already in your hands, say ‘No, I’d like to keep playing with it.’  Then talk about how the child feels, and how their friend probably feels in a similar situation.

You might be tempted to praise “good sharing” when you see it, but a whole host of research tells us this is a bad idea: children are less likely to engage in an activity again after being praised for it, and are especially less likely to do the activity spontaneously (i.e. without first looking around to see if a suitable adult is watching).  If you feel you need to reinforce the benefits of sharing, focus on the impact on the other child: “Carly looked so happy when you gave her the toy!  She waited so patiently, and you gave it to her right when the timer went off, just like you said you would.”

Most of all, have confidence that your child will learn to share when they are ready!

For a deeper dive on sharing, check out my podcast episode on this topic and also the excellent booklet “The Secret of Toddler Sharing: Why sharing is hard and how to make it easier.”  It’s just 36 pages long and is packed with strategies like the ones I’ve outlined here that you can put to use immediately.

Want to get updates when I write these blog posts, that are lighter on the research than the podcasts but still packed with actionable strategies?  Sign up below!

← Why isn’t my child grateful?Is your child’s school separation anxiety a real problem – or not? →