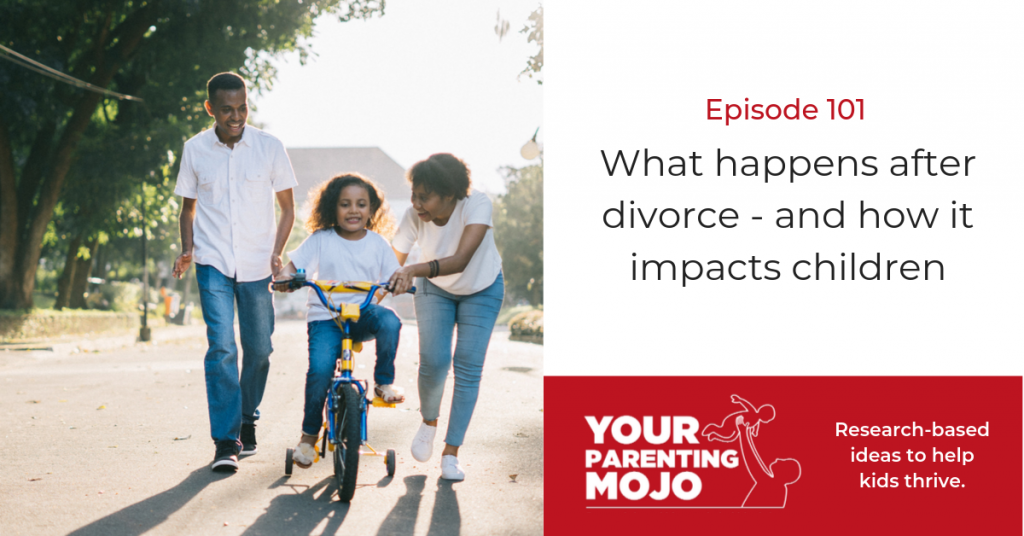 This is the third episode in our series on parental relationships – and the lack thereof…  We started with episode 35, which was called “All Joy and No Fun,” where we learned how children can be one of the greatest joys of a parent’s life – but that all the daily chores and struggles can get on top of us and make parenting – both in terms of our relationship with our child and our spouse – something that isn’t necessarily much fun in the moment.  And if you missed that episode you might want to go back and check it out, because I walked you through a research-based idea I’ve been using to increase the amount of fun I have while I’m hanging out with my daughter, who was a toddler when I recorded that episode.

Then we took a turn for the worse in episode 36 and looked at the impact of divorce on children’s development, and we learned that it can have some negative impacts for some children, although the majority are pretty resilient and do make it through a divorce OK.  For the last episode in the long-delayed conclusion to this mini-series we’re going to take a look at what happens after divorce – things like single parenting and remarriage and stepfamilies, that can also have large impacts on children’s lives.  We’ll spend a good chunk of the show looking at things that stepfamilies can do to be more successful.

Before we wrap up, I want to acknowledge that we’ve focused primarily on families that consist of a custodial mother and a stepfather because these are the most common types of repartnered families. But I do want to acknowledge that other kinds of repartnered families exist. There is much less research available on custodial moms repartnering with stepmothers, and custodial dads repartnering with stepfathers. These relationships are especially complex due to societal expectations about a woman’s or man’s role in a family relationship. One study recounted a lesbian couple’s when the woman who had previously been childless had only just ‘come out’ to her own parents. The new grandparents didn’t have time to accept their daughter’s lesbianism before they were introduced to the idea of also becoming grandparents, and the grandparents found it very difficult to accept their daughter’s lesbianism and their new grandchildren at the same time. Among a variety of respondents to a survey, the majority of extended families – on both sides – indicated no desire to view the stepmother as a parent of equal stature with the child’s biological mother. Because the legalization of gay marriage is a relatively recent development, I’d expect a great deal more research on this topic over the next few years as we try to understand things like how different legal ties to children influence parenting strategies and how same-sex stepparents forge relationships with their new stepchildren.
So, in conclusion, we can say that the literature shows that children whose parents divorce tend, as a group, to show poorer psychosocial adjustment than children from intact families and that these differences persist into adulthood. But there is a great deal of variability in the level of adjustment among these children, and most of them do still fall within normal ranges on measures of psychosocial adjustment and it is likely not the divorce and remarriage per se that causes these outcomes but rather parenting skill, conflict, and numbers of transitions that are bigger factors than family structure. The psychological adjustment of the custodial mother is a key predictor of the child’s postdivorce adjustment. The custodial mother may develop an exceptionally close and protective relationship with the child, which both parties may find it difficult to let go of when a stepfather enters the picture. Stepfathers are often viewed as intruders into this relationship, and children become resentful and jealous, which may be manifested in externalized, acting out behavior in boys and internalized, depressive behavior in girls. Teachers, especially, may be more likely to notice this externalizing pathology in boys because it is disruptive in class and initiates a series of actions that may ultimately get the boy referred for treatment. The girl’s behavior doesn’t cause as much trouble and so may never get noticed or treated. The literature suggests that these difficulties tend to abate after a few years in the case of boys, but persist for longer periods among girls, although I should note that not all boys will experience externalizing behavior and girls internalizing behavior, and some girls will adjust more quickly than boys.
We also learned that stepfathers should consider using different strategies to overcome this resistance depending on the age of the child – with a preadolescent child, a supportive, nondisciplinary relationship is likely to be most effective, but if the child is an adolescent already then an immediately authoritative relationship may achieve better outcomes. Perhaps the biggest thing to take away from this episode is that remarrying parents shouldn’t expect blended families to work like nuclear families, because this can lead to frustration and anger as the parents get through the fantasy stage and realize that blending a family is *really hard.* The child’s feelings of loss and resentment and guilt at betraying the nonresident biological parent, and bad-mouthing of any parent by any other parent, a lack of understanding between new family members, ongoing custody and other legal battles, difficulties agreeing to a child care schedule, financial difficulties and difficulties discussing financies, and the like can all combine to create frustration after frustration in the family. But if you approach it in a really conscious way and if the parents are really committed to listening and trying to understand each other and the children and work through problems with a commitment to learning and doing better and making the family work, then there’s a good chance that you’ll experience better than average outcomes and create a successful family unit.

Thanks for listening – if you’d like to find the references for today’s episode you can do so at yourparentingmojo.com/remarriage.