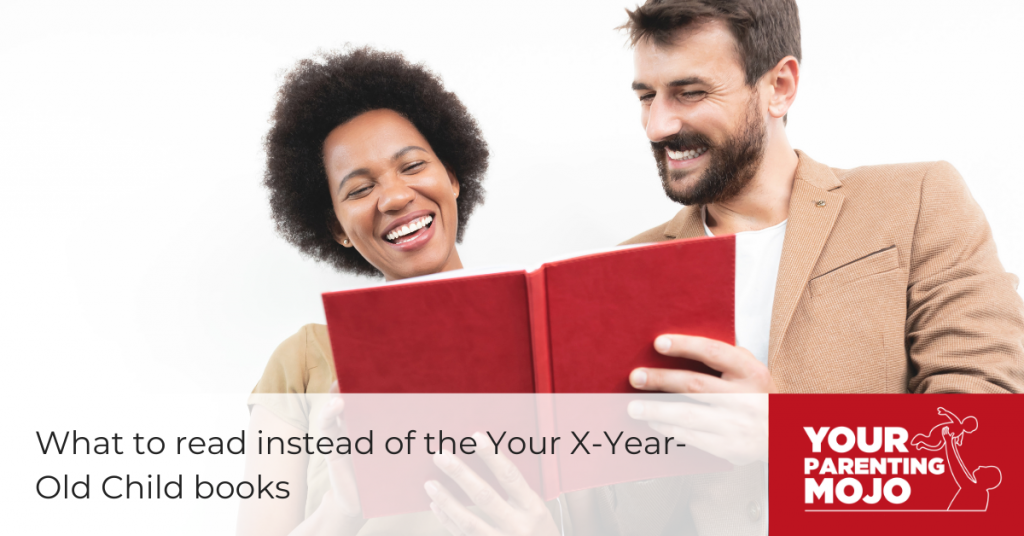 Last week I published a long podcast episode on why we shouldn’t read Dr. Louise Bates Ames’ Your X-Year-Old child books any more, which got quite a big response from listeners.  In this blog post I’ll briefly summarize the main points of that episode and then answer the question I received most often via email and in the free Your Parenting Mojo Facebook group, which was: “well, then, what should I read instead?”

There seem to be two main reasons why people recommend the Your X-Year-Old child books:

When the books are recommended this most often comes with the caveat that the reader should ‘strip out the outdated gender roles crap’ but that the rest of the information in the books is still relevant today.  That didn’t sit well with me but I couldn’t quite figure out why for a long time; I recently came back to the question after spending the better part of a year digging into these topics as I wrote my book, and suddenly the pieces clicked into place in a way they hadn’t before.

The Your X-Year-Old Child books are built on research conducted by Dr. Arnold Gesell that started in the 1920s, and aimed to find out how ‘normal’ children developed.  There are a number of reasons why this is problematic:

The Your X-Year-Old Child book by Dr. Louise Bates Ames (she was Dr. Gesell’s research partner and later established the Institute at Yale University that was named for him) have a number of specific problems as well:

Every single decision we make about our child’s life – from living in a single family home with a fenced yard to providing every opportunity enrich our child’s life to paying for hired help because we don’t have a ‘village’ to rely on happens in a cultural context.  So it isn’t possible to simply ‘strip out’ the outdated cultural information in the Your X-Year-Old Child books because the cultural context and the child’s development continually affect and are affected by each other.

Dr. Gesell himself told us in one of his books that parenting ideas from 100 years before he wrote seemed outdated and shouldn’t be used.  I believe the time has now come to consider the Your X-Year-Old child books, which were written on the 1980s based on research done in the 1930s, as outdated and no longer useful, so we shouldn’t read these books any more.

What should we read instead?

When I posted about the new episode in the free Your Parenting Mojo Facebook group, one parent said: “Oh no don’t take these away from me, I can’t find any better substitute.”

Another asked: “I had just put these on my Christmas list.  What are alternatives?”

I did cover this topic briefly at the end of the episode, but I wanted to go into a bit more detail on that here.

Let’s go back to the two main reasons why I think people read these books that we opened this blog post with, and address them in turn:

I totally hear you on this.  When your child is doing things that seem bizarre, you want to know you’re not the only one.  You want to know that other parents have had similar experiences and they’ve made it out in one piece and with their sanity intact.  I get it.  But why are we looking to get this sense of solidarity from a book that’s written based on old research grounded in values that we don’t hold?  It would be much more productive to build community with people who share our values; maybe even people we can interact with in real life.  The people who live in our building and on our street and in our community.

It’s so tempting to think: there’s no time for that.  I can’t leave the house.  I don’t have a sitter.

Well, what if you traded house cleaning help?  One week you clean a friend’s house, and the next week they come over and help you.

Or if you have a partner, trade partners for an evening catch-up – one member of each couple goes to the other’s house – no babysitter required, and any child who wakes up agitated has one of their own parents at home.

Or exchange meals with another family – it’s hardly any more work to cook a double recipe, and one night a week you get the night off from cooking.

This is where we can find real community.

Children do a lot of things that can seem incomprehensible.  I’ve worked with parents whose children have smeared poop all over their crib, peed in the HVAC vents, fought continuously with their siblings, hit their parent (repeatedly and regularly) for no apparent reason…the list goes on.

This behavior seems incomprehensible, but it isn’t.

It’s always an expression of a need.

Our job is to be the detective who looks for the need underlying the behavior – when we meet that need, the behavior we find so obnoxious very often goes away.

In my book I’ll help you to draw your child’s ‘needs cupcake’ – the needs they’re trying to meet over and over again that sit like a cherry on top of the ‘cupcake’ of all their other needs that pop up more intermittently.

For many children these cherry-on-top needs are things like autonomy, connection, and movement.  And 90+% of the time it is possible to meet their need and meet your need as well.

But what if we can’t find the need?  I argue that this is when we should look for professional help.  Rather than comparing our child to an arbitrary average (that’s grounded in White supremacist, patriarchal, capitalist values from the 1930s), we can look to understand whether we’re able to meet the needs of the child in front of us and if we can’t, then we should look for more support.  A professional may be able to identify unmet sensory needs that are overriding the more common needs for connection and autonomy that many children have, or needs for interacting with other people in ways that are less stressful than the ways we’ve been trying to get our child to interact with other people, or things they can do in school to quiet part of their mind so they can concentrate on what the teacher is saying.

But the key is that we’re looking at this child’s unmet needs, not at comparing them with a ‘normal’ child.

There are very, very few books that will help you to do this.  Dr. Mona Delahooke’s book Beyond Behaviors is one; I interviewed her for a podcast episode (the title references anxiety but the ideas are useful whether or not your child is experiencing this).

The outstanding little book Parenting From Your Heart by Inbal Kashtan is another; she uses tools related to Non-Violent Communication that I looked at in this episode.

Hunter Clarke-Fields’ book Raising Good Humans and Carla Naumburg’s book How to Stop Losing Your Shit With Your Kids can help you to do the inner work to stay calm enough to do this work in difficult moments (my Taming Your Triggers workshop helps you to do this in community, which can help you to take on the ideas in your body and not just in your head, which is much more difficult when you’re doing the work by yourself).

And of course this is the entire purpose of my book (which is currently title-less!  If you have ideas, please be in touch!), due out in August 2023.  If you’d like to find out when I’ll be near you to do a book reading – and potentially a full-day workshop based on the ideas in the book as well, you can sign up to find out more at yourparentingmojo.com/book.

(Links to books are affiliate links.)