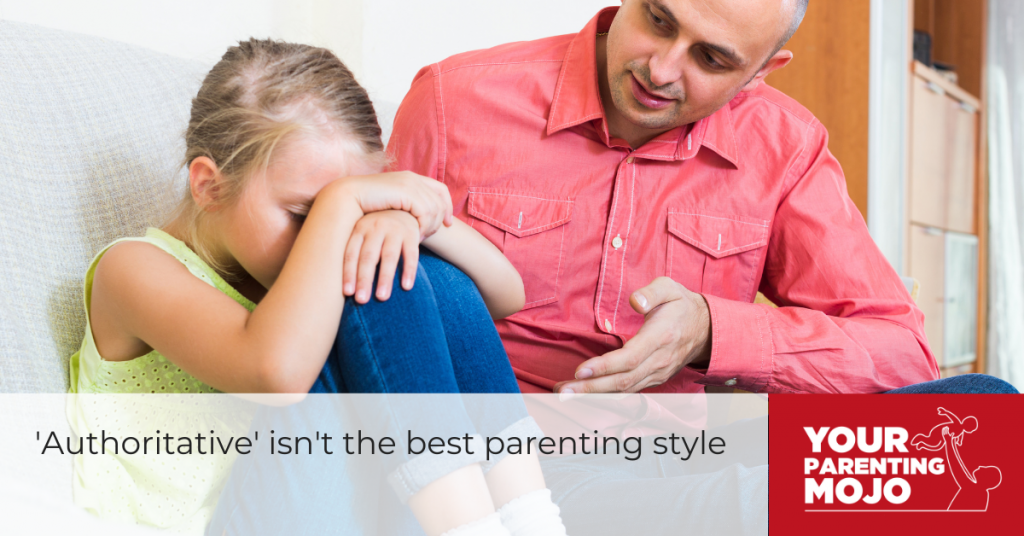 Perhaps you won’t even believe the origin of that quote: it’s from a paper co-authored by Dr. Diana Baumrind, creator of the parenting styles (authoritative, authoritarian, permissive, and neglectful), speaking about the methods that parents need to use to achieve the so-called ‘best’ authoritative style.

But allow me to back up a little bit.

Last year I was preparing for an interview about whether spanking really is harmful for children, when I stumbled on that quote in a paper titled: “Are Spanking Injunctions Scientifically Supported?”.

Since the paper was co-authored with a researcher (Dr. Robert Larzelere) who has made a career out of defending spanking, perhaps we shouldn’t be entirely surprised that the paper concludes that spanking by a loving parent and not done in anger (because who ever spanks when they’re angry?!) is not just not harmful, but a useful disciplinary tool.

And the reasoning behind this?  Well, back when scientists didn’t need to get approval from university ethics committees before they designed studies that actually involved hitting children, a couple of researchers at the University of Idaho did a study that tested the effectiveness of forcing a child to stay in Time Out in a four-foot by five-foot empty room with a four-foot high plywood barrier at changing the child’s behavior.  Time Out to be effective at gaining the child’s compliance, although on average it could take 8.6 spankings to get the child to stay in Time Out.

Dr. Baumrind and Dr. Larzelere use this evidence to effectively say: “Science shows that Time Out is effective, but if you don’t happen to have a four-foot by five-foot empty room with a four-foot high plywood barrier, then we can’t ban parents from spanking their children to change their behavior because no other method has been proven as effective at achieving this goal.”  (And of course it can never be proven now, because no modern ethics committee would ever permit the research.)

What is Authoritative Parenting, Anyway?

According to many, many articles on the parenting styles, there are four of them, organized by different levels of “warmth” and “demandingness.”  (The label “demandingness” was a substitute at some point for Dr. Baumrind’s original label of “control,” which is quite telling – she saw parental control as a key component of child rearing.)

High demandingness and low warmth is Authoritarian parenting: laying down the law for the child, and not exhibiting much caring behavior toward the child.

We’re told that the ‘best’ style is Authoritative parenting, where the parent expresses warmth, which “refers to the parent’s emotional expression of love that motivates high-investment parenting and brings about cohesive family relationships.”  It’s a relationship where give-and-take happens routinely, and the parent does consider the child’s needs.

But “warmth does not imply unconditional acceptance; a warm and loving parent may also be a firm disciplinarian,” by which Dr. Baumrind means that the parent will “directly confront, rather than attempt to subtly manipulate, their children and thus may invite open conflict with their children at points of disagreement.” This direct confrontation usually takes the form of limits with which the child is expected to comply but of course spanking is also an option if limits fail (since spanking is officially endorsed by the creator of the Best Parenting Method!).

Here’s where things get sticky – on two fronts.  Firstly, Dr. Baumrind never actually translates these concepts into an indication of what Authoritative parents should do with their children.  And secondly, it’s clear that the focus here is on changing the child’s behavior.  When we do that, it can make our lives easier in the short term – but at the expense of our child’s long-term wellbeing.

What does an Authoritative Parent do?

So we’re supposed to be ‘warm’ – and also ‘demanding.’  We are to set minimum behavior expectations and make our child comply with these – but most parents believe their children are capable of doing things like not having a tantrum and sharing toys with other children years before most children are actually ready to do this.

The American Academy of Pediatrics says that Authoritative parents “attempt to control children’s behavior by explaining rules, discussing, and reasoning.”  This all sounds well and good, but it assumes we have real reasons for our rules – which much of the time, we don’t!  I work with parents who say things like: “I KNOW I’m not being rational, but when my child refuses to help something snaps and I dig my heels in and the more wound up they get, the more I refuse to budge!”

Dr. Nancy Darling, in a paper reviewing Dr. Baumrind’s research, says that “one authoritative parent might have a policy stating that homework must be finished before the child engages in any other activity, whereas another might require outdoor exercise before homework is tackled.”  What’s clear here is that either parent might hear their child’s objections to the homework or the outdoor exercise, but this doesn’t result in any actual change in the policies.  The authoritarian parent might not believe they have all the answers as the authoritative parent would, but they still act as if they do.

And when we’re “explaining rules, discussing, and reasoning,” we’re essentially working to convince the child that our way is best, and that when they consider the idea rationally they, too, will see this and will do what we want them to do.

When our children are young it really isn’t that difficult to get them to change their behavior to meet our needs.  They crave our love and attention so much that they’ll do almost anything to win our approval – even separating off the part of themselves that long for autonomy, creativity, and being truly known and changing their behavior to comply with our demands.  (We call the children who refuse to do this, and who persist in asserting their needs ‘defiant.’)

This happened to many of us when we were little as well.  We wanted to be able to say what happened to our own bodies, and to be held with kindness and care when we had a tantrum, and to be comforted when we felt like we couldn’t walk any further instead of being told we were lazy.  And our parents, who were doing the best they could (just like we are!) were warm toward us when they could be, and required that we change our behavior to meet their standards.

We put our needs on hold when we were young, because we wanted our parents’ love and affection so much that we’d do anything to get it.  They didn’t know how to understand what our needs were and after decades of conditioning, eventually we forgot how to do it too.

By the teenage years we were either so accustomed to squashing our own needs that we kept on doing it and became the model child, or we rebelled and got in with the wrong crowd because they were willing to see us for who we really were.

And now we feel frustrated when it seems like we aren’t being heard.

We feel angry when it seems like our ideas are dismissed.

And we panic when we’re in a situation where it seems like we have no control because it reminds us of how helpless we felt as children.

Authoritative parents listen to their child, but don’t always accept their viewpoint.

Authoritative parents make sure their child complies with The Rules.

Authoritative parents make sure they are in control (with a side of warmth to help the medicine go down).

Authoritative parenting leaves us feeling frustrated, angry, and panicked when our children don’t do exactly what we want  – because we remember how much we were hurt by our own parents controlling us, and we don’t want to do this to our child – but we don’t know any other way.

A better way: Meeting both parent’s and child’s needs

The problem with Authoritative parenting is that Dr. Baumrind hardly conceive of an approach to parenting where the parent wasn’t in complete control, but also wasn’t getting walked all over.  (She did find a few families in her original studies in the 1960s who were practicing this kind of approach, but dismissed it because while the six girls were “achievement oriented and friendly,” the two (just two!) boys were cooperative but “were notably submissive, aimless, not achievement-oriented, and dependent.  The harmonious pattern of child rearing seemed to produce an effeminate orientation in boys.”  The patriarchal ideas that link “submission” and “dependency” with “femininity” are a big reason why boys struggle so much to express their feelings…but that’s a topic for another episode.

But we can actually raise children in a way that honors their needs…and also our needs.  Meeting their needs doesn’t mean we have to get walked all over; it just means we have to actually identify and state our real need, rather than the arbitrary rule we’ve decided our child must comply with.

That’s not always easy when we’ve spent so many decades being told that our needs don’t count, but it is possible.

We will still have some limits on our child’s behavior, and there are effective ways to set these so your children will respect them.  But when we also understand what our real needs are, and what our child’s needs are, we can go far beyond limits to having a relationship where both of our needs are met.

If you’d like to learn more, I hope you’ll join me in the FREE Setting Loving (& Effective!) Limits Masterclass on Saturday May 14 from 10-11:30am.  Just click the image below to learn more and sign up – we’ll send a recording to everyone who registers, so go ahead and sign up even if you can’t make it live! 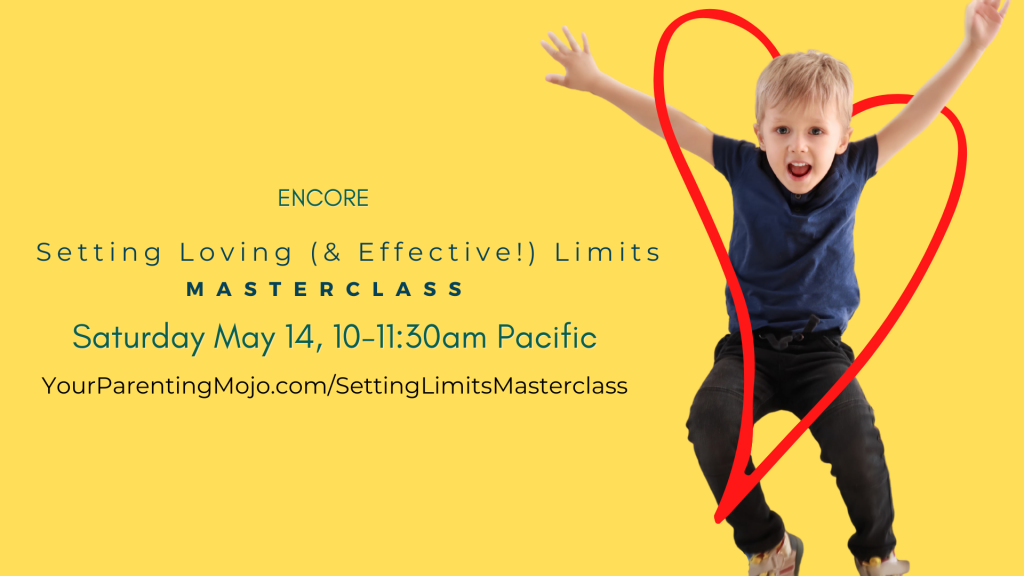